“Week end chat” has been a Monday routine in my Spanish 2 classes for the past several weeks, ever since we started the preterite. To keep it fresh, I like to switch up the activities. Here are a few I’ve used:

I set the animation so the English didn’t show, and went over the meanings (I hadn’t taught past tense yet).  Then, I had them write 3 sentences about what they did that weekend, writing phrases on the board if they asked me. After a few minutes, I called on them and asked what they did, and tried to ask follow questions – ¿Con quién? ¿Dónde trabajas? ¿A qué hora te levantaste? I tracked participation on Class Dojo and gave extra points for each follow up question they responded to.

2. Group discussion: Focus: Asking and answering questions, saying what someone else did A few weeks later, I had re-arranged my desks into groups of 4. I gave my students this handout as a guide to talk about their weekend. I walked around and listened/chatted with each group, then as a class, called on individuals and asked them what someone else in their group had done.

Honestly, I really like this activity…in theory. In practice, my kids speak Spanish when I’m there, switch to English when I walk  away, and manage to answer the ¿Qué hizo [tu compañero]? question by asking each other in English during their discussion time, translating and writing down in about 1 minute, and being ready with that answer when I call on them. Not a lot of actual discussion going on. So a few weeks later we did… 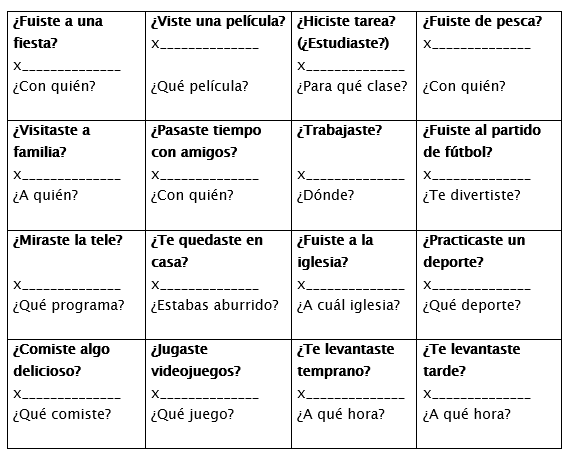 My kids seemed to enjoy this one, and I heard a lot of Spanish being spoken during the activity. For me, the key to Seek & Signs (or classmate scavenger hunts, whatever you want to call them) is not to use them too often, and these magic words: “Don’t sign unless they ask you in Spanish.”  When they finished, I had them write sentences in Spanish telling what other people did (Remember to change the verb ending…if Sara did the action, how does the verb end? It needs to be the él/ella ending…Rinse & repeat). I tailored the questions to the activities I had been hearing over the past few weeks, and it seemed to work well- we found someone for every activity in each class! I’m going to re-use this in a week or two, but maybe change a few of the questions.

4. Two truths and a lie. Focus: yo form preterite (writing), él/ella preterite (listening) “Write down two true things you did this weekend and 1 false thing. Put your name on it, mark the lie, and give it to me.” Since my kids sit in groups, team games work really well. Each of my groups was a team and got a mini white board. I read a statement from a student (written in yo form, I read in 3rd person), and the groups decided which one was false (the group of the target student was exempt). They showed me their answers on their whiteboards, and I kept score on the document cam (you could also do it on the board, but the doc cam was easier for me). My students looooooved this one. Read mine! Read Drake’s! No, don’t stop, you haven’t read mine yet! Just do them all! (I did not give in…after reading about half of the class’s sentences we had been doing it long enough).

Each week, I run through the most popular phrases with this Quizlet set. My students are doing really well with the yo form (I am teaching grammar pretty traditionally this year :/), and had no trouble at all with fui when I taught ir, because they had practiced it so much each week with weekend chat. I also like how it’s a chance to get outside of our mandated Realidades vocabulary lists, and gives students a reason to acquire vocabulary that is relevant to their lives.

I am a teacher, dancer, and Spanish-speaker. This is my place to organize & share my thoughts on teaching, foreign language & language learning. View all posts by Andrea

5 thoughts on “4 Variations on Weekend Chat”

Bloom into style, expression, and comfort

Reflections and thoughts on language teaching

This is how we learn Spanish...

A French Affair: reflections on my teaching

PBL in the TL

Traveling the proficiency path, one step at a time

My generation of polyglots

It's time to..GET YOUR LEARNING ON!

Let's find our way together through this crazy, beautiful profession of teaching, shall we?

A glimpse inside my journey of teaching Spanish